Captain Ron Fortier and Chief Engineer Rob Davis are back aboard the Airship 27 to talk all about the 2016 Pulp Factory Awards and so much more in this episode of the Airship 27 Podcast! PULP FACTORY AWARDS OFFICIAL BALLOT – ( http://bit.ly/2016PFAwardBallot​ ) http://www.airship27.com

This time in the hanger of the Airship 27, Captain Ron Fortier and Chief Engineer Rob Davis discuss The Bagman, All American Sports Stories, Sinbad, Harry Houdini, and Rutherford Jones. Plus, they unveil their brand new radio commercial! Then, it’s on to listener questions.

Chief Engineer Rob Davis and Captain Ron Fortier return in 2016 for another episode of your favorite pulp-themed podcast, Airship 27! On this episode, they talk about what’s coming up this year, plus the release of Legends of New Pulp Fiction, the benefit anthology book released over the holidays! www.airship27.com 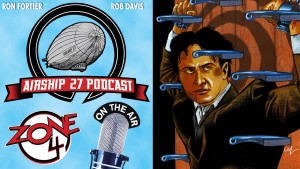 Captain Ron & Chief Engineer Rob talk about their many con appearances this year, what’s new on the market, what’s up coming up next and explain the creation of Pulp Radio. All in a fun-filled fast hour of New Pulp News.