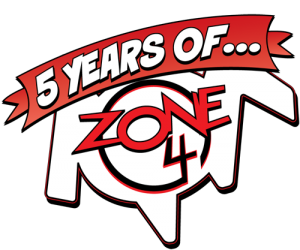 That’s right, on April 3rd, 2009, the very first episode of Zone 4 aired as part of The Related Recap on ComicRelated.com. The show would remain in that feed, as a sub-show of the Recap for three episodes. Then with episode 4, we would break out into our own feed and start the historical weekly run we have continued to this day!

While our super special 5-Year Anniversary episode isn’t until next week (episode #264), we couldn’t let this monumental occasion go by without a mention!

We can’t thank you enough for all the years of support you have given us. 5 years is a huge milestone, and without your comments and feedback, and interaction, we would not have had the steam to keep it going. We do this show for fun, but we also continue to make it because you all enjoy it. And that means the world to us.

I’ve talked about how the idea of Zone 4 came about many times, so I won’t bore you with the details. Suffice it to say, it was an inkling of an idea I had that the three other original cast members and I gradually ran with. And thanks to Chuck Moore of ComicRelated.com, we had a place to put it.

This is a HUGE year for Comic Related and Zone 4. In addition to our 5-Year Anniversary today, one week from today is the 1-Year Anniversary of Hall of Toys. April 19th is Zone 4 Co-Host Mike Luoma’s 300th episode of his Glow-in-the-Dark Radio podcast, which is also on CR. And in October, CR celebrates its 10-Year Anniversary!

Why I Love Comics, Eric Ratcliffe’s podcast, has also been going for 5 years now, and RaynMan can’t be too far behind either! And The Related Recap, where Zone 4 began, just celebrated its 6-Year Anniversary!

So a lot of big things in 2014! We hope you stick around for all the celebrations. April 2014 is the month of Zone 4. Look for LOTS of content to start flowing all around.

On behalf of all my current, past and future co-hosts, to all of our fans, supporters and past and future guests, we thank you tremendously for all the support, and for your downloads each week.